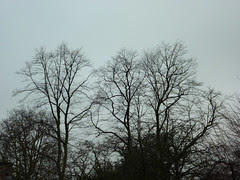 It looks gray and bare, but somewhere the life is there, and soon, in a ew weeks, the trees will become green again.

I do not despair.

Six years ago, I opened my first (french) blog, in five years of blogging, lot has happened, and I did prove what was my intention at the first day, what I just hoped I could: There is life after 70.

The readers of my blog, and those who looked, and sometimes even commented on them, understood my meanings, or discussed it with me, helped me to live a fuller life.

This blog, begun a lot later, when I begin to think that I'll go to London, and of course, after my arrival here it went on, learning slowly to communicate, perhaps a bit better in English.

What is interesting is that each of my blogs has its own characteristic, its life, its personality, of which I was not really aware when I begun them. Each shows part of me, more or less private or public part.

And now, I have to add also my newest one "Competent Comunicator", the name of the Toastmasters Manual. As much as I would like to become, better, I did not become "competent communicator" just by giving my first ten - even 12 speeches, and reading books or beginning to tell stories.

I opened that blog, to speak in it about public speaking and storytelling and all what is around it. To tell about from where one can learn and how, at least a bit of my experience.

Opening a new blog, after my 75 years, just proves I was not entirely wrong when I decided my first's blog title: there is life after seventy, and the web did and does help me to make it even better.
by Julie Kertesz - me - moi - jk at 10:27 AM